(Check out the video with description, resources, comments, etc. on YouTube)

Chad:  It's Chad with Landscape Leadership and I'm here with one of my friends and working peers, Mike Millville, who takes a lot of photography for our clients. Today, we're going to be talking about, one of the great types of images on your website or marketing collaterals, including some of the people that work at your company.

So the first thing that comes to mind is when I've seen people in company marketing materials that probably were bad choices. They either look miserable or something's just not right.

So let's talk about if you're a lawn care or landscaping company owner and you're thinking about, okay, who on my team can I get to be on these shoots?

What are some of the things that you look for?

Mike:  One of the things I first would look for is how approachable the person looks. So even if even if you may not get that feeling when you first meet them, maybe they do warm up or whatever, they might not be the best person to have on camera.

Chad:  Right. Some people clam up immediately if they're on camera, like they're completely uncomfortable with it. We don't say, choose the best looking person on your team. It's not about that. It's about people that can instantly, just by reading their face, communicate that they actually like enjoy their job.

One of the things we always tell people is no tough guys or girls. Because there's some people that never smile and they look miserable every day that they're working, even if they photograph really well.

So what are some of the things that you tell them when you're shooting pictures of them doing different types of work or interacting with clients?

Mike:  If they're not used to being in front of a camera I tell them to loosen up and smile. I'll try and joke with them a little bit, although I'm not a comedian, so yeah, bad jokes, work.

Sometimes you can actually talk to a person and kind of get them thinking about something positive or happy like their family. It doesn't have to really be specifically to what you're doing. You just need them to give an emotion on their face. It doesn't have to be super cheesy, smiling or way over the top. It can just be a subtle thing.

Chad:  Yeah, we've had people in isolation, like treating a lawn or doing something. But then we've had group photos where people were actually working together and so we've said things to them and directed them saying things like, "Do you guys really like working with each other?", and they'll start joking around and picking on each other a little bit. But they're kind of smiling and being a little jovial and the pictures come off so much better.

Sometimes when we take these pictures though, we've realized that unfortunately people don't have all the things that they need for these situations. So, it's a learning experience and we've came up with a really long list of props.

What are some of those items?

Mike:  First and foremost, we work with a lot of companies that deal with chemicals so gloves are a big one. A lot of times people have those bright teal gloves or yellow gloves that are just the worst.

Mike:  So you have to wear them but there are ways to minimize that. One of the ways we've found is by using black or gray gloves. It just it takes the emphasis off of that bright color and allows you to just focus on the happy person working for your company.

Chad:  Yeah. And a lot of times we start these shoots really early in the morning. So it's the beginning of somebody's workday and  they're looking pretty fresh. Hopefully they shaved and look presentable.

Mike:  Sometimes you gotta get him a cup of coffee, though.

Chad:  Yeah, that does help. But you know, at that time they haven't been lifting bags all day, or moving materials, or lifting plants. Their uniform is pretty clean at that point in time. And one of the recommendations you gave to me a few shoots ago, was telling them to bring a couple of shirts. Some of those situations were a little later in the day, so we intentionally planned that out so that they could have a fresh uniform. Because the last thing you want to do is spend a bunch of money on a really great shoot and that guy's completely dirty and sweaty. Of course, that's a challenge, especially depending on what time of year you're shooting.

Mike:  It doesn't sound like something you would normally think of, but it's a pretty simple thing to do.

Chad:  Then there's other things that team members use to do their job. There's the small equipment that they might utilize or even the truck that they're driving.

Mike:  And a clean truck!

Chad:  Exactly. Like don't pick the one that's five years old, with all of the letters peeling off!

Mike:  Or you updated your logo!

Mike:  I mean sometimes you just can't overcome certain things like that. We were on a shoot one time and somebody got there, and literally the night before, a piece of equipment wasn't working on whatever vehicle they were on. Sometimes you have to deal with what you have and you make the best of it.

Chad:  True. It takes some intentional thought to plan these things out and get them to happen. And if you do that, you end up with some really, really great shots that have your team members in that really take you from being impersonal brand to being more of a group of people that are representing that brand, and can sell your product or your services so much more easily.

So let's talk a little bit about some of the favorite images that you've had or I've had from these shoots that we've done for our lawn and landscape clients.

It works really well because you get the interaction and you feel a connection. You feel like somebody actually there holding your hand, showing you how to use this as opposed to just using a stock photo of just somebody holding a phone and you put in your website on whatever the thing is. It doesn't have that interactive feeling that you get with a photo like this.

Chad:  Yeah, and I think subconsciously people always realize that it's a stock photo anyway and it just doesn't seem authentic. You know, this raises an interesting point because we showed a couple different photos here of this same kind of setting with this guy showing the customer how to use her irrigation controllers on her phone, and some of the images don't show his face.

One of the things that I often hear from clients is, "Hey, you know what? We had this technician and he was on the shoot and we had to let him go. So what do we do now? This guy's plastered all over our website!"

And that's why, when you and I do these shoots, we try to stage out, three, four, five different properties during the day and get different people on those properties for this reason alone. That way you don't have one lawn care technician and he's on every single service delivery shot that you have for lawn care.

Another thing we like to do is get some really great group photos of your entire team. What I typically see is everybody out and lined up against the garage door or the warehouse or it's just the big shot where they send a drone up and it's a bunch of little dots there.

But you've created some really fun creative shots using a couple equipment elements and people. So tell me some about some of those pictures.

Mike:  One of my favorites was for a place called Joshua tree in Bethlehem, Pennsylvania. It shows not onlytheir equipment all clean and polished, but it gives people space to be positioned in and breaks things up a little bit. It just makes things look more fun and interesting.

Chad:  Yeah. It's not just a wall of people, it's kind of mixing them in with what they do as well. And, I've found that employees at lawn and landscape companies really enjoy these pictures because it's kind of a little bit looser. We've been able to give them some props or have them stand on things and not everybody's doing the same thing. It really adds some flare to the pictures.

Mike:  Yeah. Sometimes people are sitting, standing, whatever. They could be sitting on top of a truck up, on the boom of a bucket truck. It's a little bit more fun than just a line of people.

Chad:  Absolutely. Pictures of people are not only just powerful in marketing your services, they're also great in recruiting great people to your team. So if you're a lawn care landscape company owner and you want people that are likeminded and like to have fun, like to do the hard work and enjoy their jobs, you can really communicate that with your photography. I hope you've learned a lot from this. Thanks a lot. I have a really great day.

Want regular, practical tips like these to take your lawn care or landscaping business to the next level? Then consider subscribing to my YouTube channel. Or if you'd rather read our in-depth articles on Landscape Leadership's website, you can also subscribe to our blog. 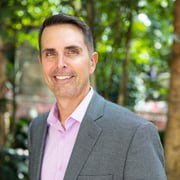 Chad is the Vice President at Landscape Leadership. Prior to joining our team he served as a marketing manager for one of the Top 150 Companies in the Green Industry. In addition to his vast marketing experience, he also has held certifications such as an ISA Certified Arborist and Landscape Industry Certified Technician. He currently resides in beautiful Lancaster County, PA.