I want to tell you a story about a landscaping company that no longer exists.

A short time before their demise they were regarded as the most creative and successful design/build company in their local market. They were one of the three largest as measured by annual revenue. They were the company to work with and work for.

I worked with this company. Unfortunately, I was there to see it come to an abrupt end when it was sold for peanuts and absorbed into another local landscaping company.

It didn't have to happen that way.

This was a firmly established market leader with a twenty-year pedigree. They had market share and share of mind.

Let's define these two terms before moving on with our story.

Market share represents the percentage of an industry, or a market's total sales, that is earned by a particular company over a specified time period. Market share is calculated by taking the company's sales over the period and dividing it by the total sales of the industry over the same period.1

Mindshare - or share of mind - is a term that describes the amount of consumer awareness or popularity surrounding a particular product, idea, or company. It is the consumer perception of a particular brand compared to their rivals.2 This is much more difficult to quantify compared to market share, though still very important. 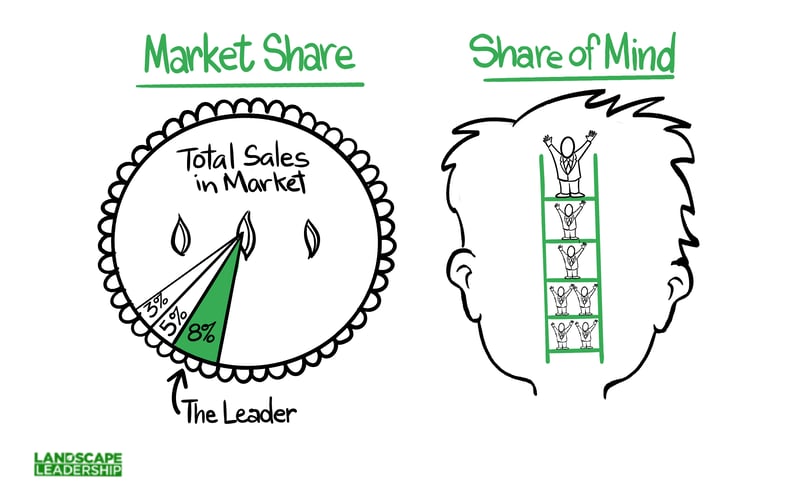 This company had top revenues and the top rung of the ladder in the mind of their prospects.

Both the company's market share and share of mind were eroded over a number of years as, simultaneously, key employees left to join competitors or start their own companies in the same market, and, the company changed ownership three times.

That's a lot of turmoil, but, not so much that it should have buried the company.

The real problem was that this once-strong landscaping business got complacent and did absolutely nothing to protect their leadership position in the market as operations were becoming unhinged.

They had a giant target on their chest, and instead of fighting back, they sat in their corner and took all the best punches from their competitors (many of whom had once worked at the company!).

I watched all this happen. I heard customers calling to complain and cancel maintenance contracts. I heard past employees disparaging the company and taking clients. I saw the leads dry up.

The company-wide ego clouded the reality of the situation. They thought once at the top of the mountain, always at the top. Wrong-o!

You must protect your position at the top!

As a leader in your marketplace there are numerous things you need to do to maintain your position. Recruiting, culture, quality of service, pricing strategy... all of these things are important. However, in this article, I'm going to focus strictly on what you can do from a marketing perspective.

Marketing – or lack thereof – is exactly where this company dropped the ball. They did absolutely nothing as it relates to marketing. As I've described, they thought they could survive on reputation alone.

IMPORTANT: How you market your business as the leader in your marketplace should be very different compared to how you promoted your services when you started your company and were chasing the top companies.

You need to shift your marketing strategy for the present reality, not stop marketing all together like this company I've described.

When I think about this "shift", I put the various marketing strategies and tactics into five big buckets:

As you can probably see, maintaining your leadership position in your market comes down to elevating your visibility.

Let's go in-depth into each of these...

You know what it takes to protect your leadership position? Money! Now is the time to spend that profit, not hoard it for your exit.

If your visual brand identity (i.e.- logo and other assets) is a bit outdated, then now is the time to refresh it.

Wrap those vehicles. And do it in a way that screams, "We're the leader!" (i.e.- not cheap asses) and elicits a heavy sigh of disdain from your competitors.

How you present your company online – namely your website – should reflect your position in the marketplace. In other words, you should have the best damn website in your market. After all, isn't that what your customers and prospects expect from the leader??

I can say the same about your visual assets like photography and video.

Spend the money to keep your competitors a step or two behind. If not now, then when? After your competitors knock you off the mountain top? Then you'll open your wallet?? That'll be too late.

Starbucks spent less than $10 million on advertising in its first ten years. They relied on publicity and word of mouth to grow their brand. Wal-mart, Microsoft, and Google did the same. Only recently have you seen paid advertising from Amazon on your television.

There's a reason for that... and a lesson for you.

Today, all of these companies advertise. But, they don't advertise to build their brand, they advertise to defend their brand from competition and to maintain their leadership position in the minds of consumers.

Advertising should always come after you have achieved a strong position in your market. Not before.

ABC Home and Commercial Services is a do-it-all kind of landscaping company here in Austin, Texas. They may be the largest company, as measured by total revenue, in Central Texas. They advertise regularly on television, radio, and billboards throughout Austin.

They spend considerable advertising dollars to defend and protect their leadership position.

Throw out the idea of return on investment (ROI) as it relates to paid advertising channels like television, radio, and print. Starbucks and Amazon don't spend millions of dollars on advertising to grow their brand and capture more market share.

Remember, they spend those millions to protect their brand. They don't expect a return on their investment in the traditional sense.

As the leader in your local marketplace, this should be your mentality too. If contemplating a radio advertising campaign for $20,000, the primary question should not be, "hmm, well, are we going to sell $80,000 worth of work to pay for this campaign?"

The question to ask is whether or not your ads are going to reach the right audience first of all. Assuming this to be the case, then your strategy should be to promote and reinforce your leadership position in the mind of consumers.

Back to the company I worked for who eventually went under...

As I'm sure you can guess, they didn't spend a dime on advertising. Their mentality was, "Why would we spend money on advertising when everyone already knows who we are?"

I guess they thought they were smarter than Starbucks and Amazon.

3. Stay involved in your community

When this company was quietly acquired and had to move its longtime office and three acres of plant inventory and hard goods over the course of a summer, they didn't even bother to put a sign in front of the property telling onlookers what was happening. Unsurprisingly, the word around town and throughout the industry was that the company was going out of business. But that wasn't the case at the time.

Can you imagine a scenario like this? Such complacency that even a sign was too much of a bother!

Leaders don't hide away in a basement. They are front and center.

Sponsor events and causes in your local community.

In May 2020, ABC Home & Commercial Services pledged to donate a portion of its sales to local food banks through June, 2020, resulting in $82,380 in donations, which provided nearly 330,000 meals across Texas.

Leverage your leadership position in the community for media opportunities and free publicity. Bobby Jenkins, owner of ABC, was recently interviewed on television about their involvement in the annual KVUE 5 Who Care Awards in which they are a lead sponsor.

Be active and be visible.

The lawn and landscaping industry is not a zero-sum game. There's no consumer spending cap.

Because of this your company's growth strategy should include promoting and growing the entire market for your services while protecting and maintaining your position as the leader.

It's the ole' "grow the pie" metaphor in action. See the illustration above.

"Growing the pie" requires innovation and leadership on your part as the market leader, not stagnation and complacency.

This is one reason I appreciate professionals like Mike Rorie, Marty Grunder, and Jim McCutcheon who understand what it means to grow the pie and don't shy away from a leadership position in promoting the lawn and landscaping industry as a whole. It helps their companies... and everyone else.

Participate in your state and local industry associations. Take a leadership role to spur innovation in others.

Showing up and being visible within your industry helps protect your position as the market leader.

There was so much turnover in ownership and key employees at this doomed company that all credibility, authority, and thought leadership slowly drained away. There was no leader or figurehead. It's impossible for a company to maintain market leadership without this.

Be a thought leader in your market. This is where content marketing comes into play, whether that's through writing, video, or even podcasting. YOU, the owner or executive, should be front and center in this initiative.

This can include speaking at local or industry events if you are comfortable in that role. You are a recognized leader. Your peers and prospects want to hear your insight.

This strategy supports the previous two points I made: Stay involved in your community and promote your industry.

At the time, the fall of this company I was working for seemed very dramatic. But, in hindsight, it was a slow progression rather than a sudden push off a cliff.

Their market share decreased little by little while slowly moving down the ladder of consumer awareness until they were merely an afterthought, rather than the leader like they once were.

This story should serve as a cautionary tale for any of you who currently find yourselves as one of the leading companies in your marketplace. This fall can happen to any company.

You must be proactive and purposeful in protecting your leadership position. I hope this article provided you some insight into how you can do exactly that.

If you want more articles like this please consider subscribing to our blog. Just enter your email address in the form below. We typically publish one article or podcast each week. 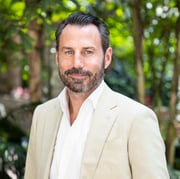